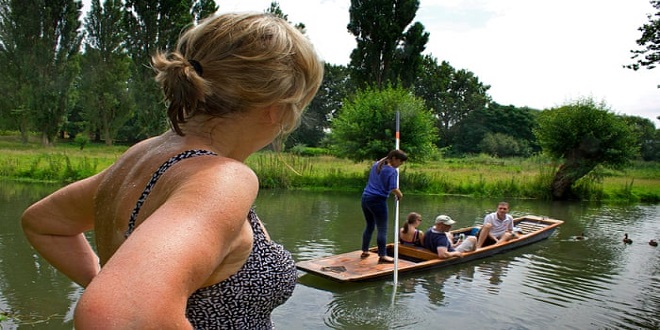 Just who were these women

Who braved the often freezing Thames, who swam for hours, mile after mile, setting new records for speed and endurance, winning championships, and representing their country abroad? History officer Michele Loose inserts a memory stick into a computer; she wants to show me some photos which have been recently donated. I stare at the screen as it lights up with a sepia image of eight beaming Surrey Ladies competing for the 1917 long-distance swim from Raven’s Ait. The women stand in line on concrete blocks, apparently on the edge of the water, wearing one-piece costumes bearing the club badge. Second, from the right is Ivy Hawke, her hands on her hips, also beaming. Another photo from the same date shows nine women in the process of jumping from a big barge, watched by uniformed soldiers. A big banner reads:

Young, who donated the images, might be related to one of the swimmers, but it turns out she’s a collector who bought the photographs from a dealer at an antique fair. She admits that, when it comes to swimming, ‘I’m frightened to death of floating and cannot swim at all.

She stopped swimming competitively when she left school but a couple of years ago, and now living in England, she heard about the Human Race event from Hampton Court Bridge to Kingston Bridge. She joined the Kingston Royals Swimming Club and began to train. Then she realized her club had come into existence as the result of an amalgamation between the New Kingston men’s club and the Surrey Ladies in 1980. This meant that Rebecca had another strong link to Ivy Hawke, and she set about finding out more.

Ivy was born on 12 April 1903 and lived in Surbiton, where her mother ran the Spread Eagle Coffee Tavern. She was fourteen when she won the 1917 Thames race, an annual long-distance swim, usually starting from Raven’s Ait and in which the finish line varied, depending on who swam the furthest.

She won several races from Raven’s Ait to Kew Bridge, to Chiswick church, and Albert Bridge at Chelsea. The island was a popular place for other swimmers to begin as well; this was where, in 1888, Madame Darnley Mitchell, the ‘accomplished swimming mistress of Kingston baths’, had started her swim to Henley. It was also here, in July 1899, that Frederick Lane, amateur champion of Australia, made his first public appearance in England during a half-mile race against two Otter Club men. Lane ‘led from start to finish. The following year he became the first Australian to represent his country in swimming at the Olympic Games, winning two gold medals at the 1900 Paris Games – although he was part of the British.

After Hawke’s swims from the Ait, she did what a lot of long-distance Thames swimmers did at the time: she set her sights on the Channel. The river was seen as an ideal place – perhaps the only place – to train for a swim between England and France that would cover at least twenty miles, and many earlier and future Channel champions started their careers in the Thames. Hawke failed on her first attempts, in 1922 and 1927, and then in 1928, she made it from France to Dover in nineteen hours and sixteen minutes, becoming the fifth woman and the third British woman ever to successfully swim the Channel. ‘Miss Ivy Hawke, 23-year-old London Girl . . . Conquers Channel, ’ reported Pathé News, which filmed the last leg of her triumph. She can be seen plowing through the swell using a steady front crawl, the accompanying rowing boat lurching from side to side.

She donned both when she took part in the Hampton Court to Kingston race, the first time she’d ever swum in the Thames. She found the water ‘very clear and beautifully calm, it hardly seemed to be moving and completed the course in one hour and twelve minutes, quicker than she’d anticipated – her family were still having breakfast and missed her finish – and she will ‘definitely be back to do it again. Rebecca came across Ivy Hawke quite by chance. But Ivy’s story spoke to her and made her feel a connection with the past.