Bridge and Richmond and went on to set a world record in the Thames. 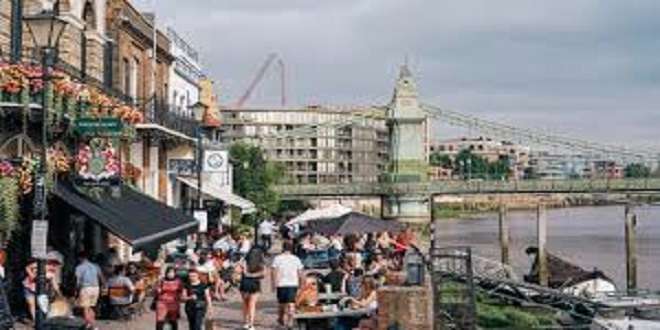 Eileen Lee planned to swim to Richmond and then return with the tide to Putney, but at Richmond, the tide was ‘still running’ so she switched to a slow breaststroke and continued upriver. She paused in the water ‘opposite the Pigeons’ for six minutes where she ‘partook of food’ before continuing to Hammerton’s Ferry at Marble Hill. There she waited for the tide to turn before beginning her return journey.

The Thames Valley Times reported that she was ‘frequently cheered by different groups on the riverside at Richmond’ but it was then announced she would finish at Kew Bridge. She had experienced ‘much discomfort from the bright sun at Chiswick’ and by Kew, her eyes were so ‘inflamed by the sun’s rays’ that she was advised to ‘relinquish her object of going down the river.

Lee had only started swimming at the age of fifteen and the paper noted that, while many had completed long-distance swims, they had done so on tides, and ‘no swimming of any importance has been recorded as starting from the lower reaches of the river and finishing up stream’. The Sportsman added that Lee’s feat would ‘stand as a record for some time.

The Daily Mirror printed photographs of Brickett feeding her during the swim, at one point spooning food into her mouth and later offering her a piece of chocolate. A Gaumont newsreel of September that year opens with Lee swimming a speedy front crawl followed by a boat laden with people, Walter Brickett standing up at the back dressed all in white, furiously waving his arms to urge her on. Moments later she can be seen swimming equally fast in the other direction, now doing breaststroke and between two rowing boats. Then she’s striding onto the dock, dressed and wrapped in a coat, arm in arm with Brickett and surrounded by beaming friends. The final shot shows her with a large towel wrapped around her head posing with Brockett.

When I contact Barbara Allan, she sends me two photos of Patrick Lee. In the first he looks dashing in his Royal Navy uniform, a row of medals on his jacket; in the second he appears decades older, a pipe in his mouth and a sou’wester on his head. ‘Granny was having her portrait taken by a professional photographer (I don’t remember why) and her father stopped by the photographer’s studio to pick her up on his way home, ’ explains Barbara. ‘As soon as he walked in the door of the studio, wearing his rain gear, the photographer yelled “DON’T MOVE” and took the photo of Patrick Lee.

Meanwhile, appears to have won her first race in 1912 and Barbara sends me a letter dated September 1913 in which her grandmother is offered ‘our very hearty congratulations on your excellent swim at Liverpool the other day’. It’s only when I look at the letter heading that I realize Eileen must have been a member of the Kingston Ladies Swimming Club.

As to why Eileen never attempted the Channel, Barbara believes ‘financials were part of the decision, but the bigger obstacle was the war. It was deemed far too risky for all involved for her to be in the Channel for the length of time the swim would have taken when warships including submarines were doing battle.’ And the reason I couldn’t find anything about her grandmother after her triumphant Thames swim in 1916 was that Eileen Lee moved to Canada. In 1919, along with her husband Maxwell Rowley Morrison, she left England and after several moves settled in Hamilton, Ontario. She was still famous enough to have been invited to meet the Prince of Wales, then traveling through Canada, at a drawing-room reception at ‘the Armories’ on 22 October 1919. But it appears that Eileen did not accept the invitation: