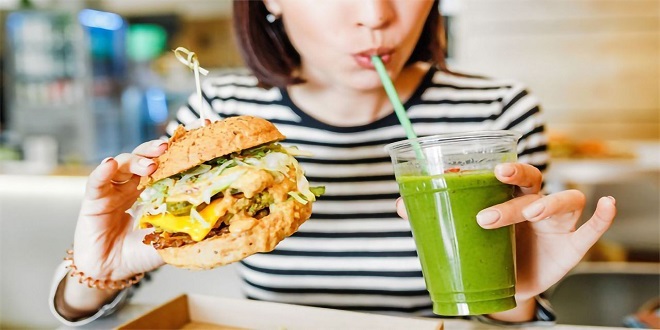 The word “Vegetarian” was coined by the Vegetarian Society of the United Kingdom in about 1847. The word does not come from vegetable as is generally assumed: It is a derivation of the Latin word ‘vegetarian‘ which means to enliven. The practice of vegetarianism, however, goes far back in history. Many noted philosophers and religious teachers urged their followers to avoid a flesh diet. Brahminism, Jainism, Zoroastrianism, and Buddhism acknowledged the sacredness of life and the need to live without causing suffering; so did many of the early Christians. There are various types of vegetarians. ” Vegans “are the strictest vegetarians who eat only plant foods and exclude all animal by-products such as eggs, milk, cheese, curd, butter, ghee, and even honey. There are ” Lacto vegetarians ” who eat plant foods as well as dairy products and ” Lacto-avo vegetarians ” who eat eggs besides plant foods and dairy products. There are even fish-eating vegetarians. The common factor among them is that they do not eat the flesh of warm-blooded animals.

The so-called protein deficiency in a vegetarian diet is more imaginary than real as the contribution of the protein value of the green vegetables has been ignored and the true protein requirement is less than that assumed. Green vegetable protein is as high in quality as milk protein and thus makes a very valuable contribution to the vegetarian’s protein nutrition. The high quality of protein balances the lower quality of other vegetarian proteins such as nuts and beans. The recommended daily allowance of 70 value proteins is 44 grams per day for women and 56 for men. Researchers have now discovered that the actual protein requirement is much less, being 15 grams per day of 100 value protein or 21.5 grams of 70 value protein or 30 grams of 50 value protein. A wholesome vegetarian diet can, therefore, easily meet the body’s protein needs.

Most diseases of the human body are caused by auto-intoxication or self-poisoning. The flesh of animals increases the burden of the organs of elimination and overloads the system with animal waste matter and poisons. Chemical analysis has proved that uric acid and other uremic poisons contained in the animal body are almost identical to caffeine, there and nicotine, the poisonous stimulating principles of coffee, tea, and tobacco. This explains why meat stimulates animal passions and creates a craving for liquor, tobacco, and other stronger stimulants. Excessive uric acid resulting from meat-eating also causes diseases such as rheumatism, Bright’s disease, kidney stones, gout, and gall stones. Meat proteins cause putrefaction twice as rapidly as do vegetable proteins. The morbid matter of the dead animal body is foreign and uncongenial to the excretory organs of man. It is much harder for them to eliminate the waste matter of an animal carcass than that of the human body. Moreover, the formation of domains or corpse poisons begins immediately after the death of the animal, and meat and poultry are usually kept in cold storage for many days and even months before they reach the kitchen. Another powerful influence tends to poison the flesh of slaughtered animals. As is well known, emotions of worry, fear, and anger poison blood and tissues. Imagine the excitable condition of animals after many days of travel.

Others are driven half dead with fear and exhaustion to the slaughter pens, their instinctive fear of death augmented by the sight and odor of the blood shambles. The flesh is often a carrier of disease germs. Diseases of many kinds are on the increase in the animals, making flesh foods more and more unsafe. People are continually eating flesh that may contain tuberculosis and cancerous germs. Often animals are taken to the market and sold for food when they are so diseased that their owners do not wish to keep them any longer. And some of the processes of fattening them to increase their weight and consequently their market value, produce disease. Shut away from light and pure air, breathing the atmosphere of filthy stables, perhaps fattening on decaying foods, the entire body now becomes contaminated with foul matter.